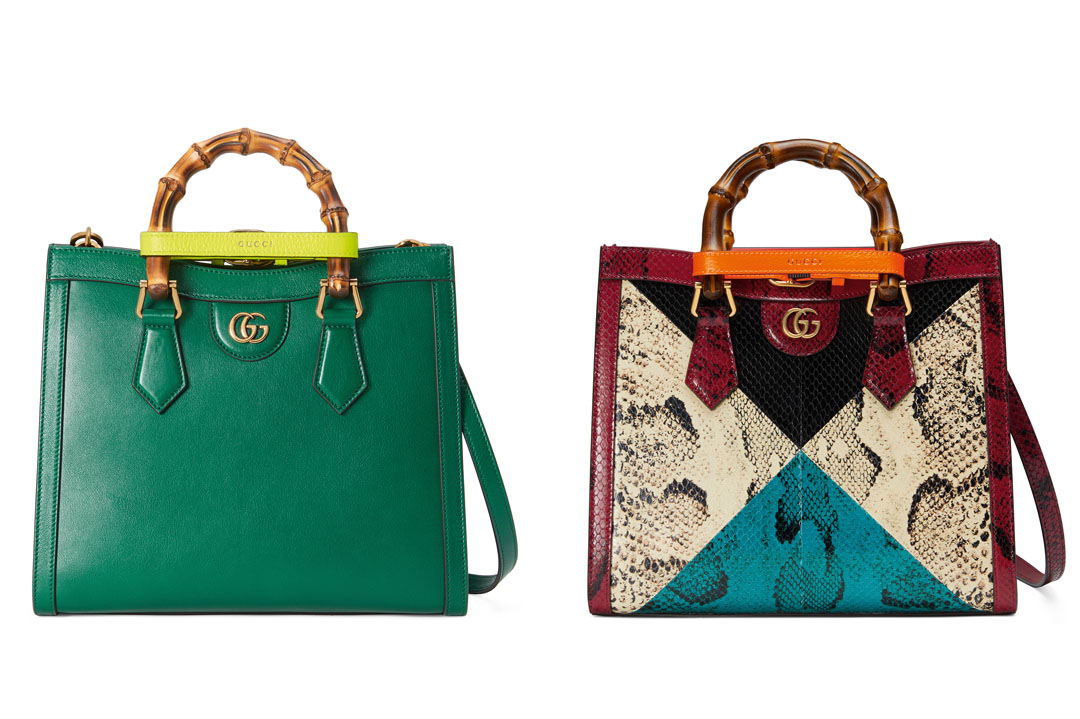 A bamboo handle tote first presented by the House in 1991 is reimagined by Alessandro Michele in the Gucci Diana. The current iteration is distinguished by removable, neon leather belts—a nod to the functional bands that once came with the original bag to maintain the shape of the handles—the latest expression of the Creative Director’s contemporary approach to archival elements. 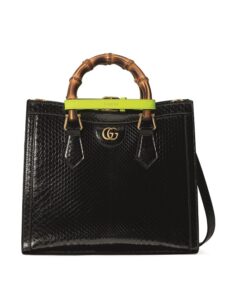 Alessandro Michele explores the concept of embodiment in the new line, which is designed to evoke an aesthetic, but also an attitude. At the edge of inspiration, he takes a step beyond in a contemplation on the vast and impactful influence that a person, or perhaps, a persona, has had across generations and cultures.

The Gucci Diana is reflective of a certain era—even its silhouette echoes a moment in which practicality took its rightful place in the wardrobe—but the line maintains its timeless appeal. It represents the notion of style in constant evolution, fitting perfectly into the conventions of sophistication one day and undergoing reinvention the next, speaking to the House’s message of fluidity, freedom, and embracing fashion as a powerful medium of self-expression.

The colour palette is bright, classic and elegant, with the addition of some intriguing, unusual hues. There are seven colours of leather in total across three sizes of bag (medium, small and mini): black, white, a timeless cuir, bright emerald green, striking red, poudre light blue and light rose.

Every Gucci Diana is paired with three matching coloured belts in either fluorescent yellow, pink or orange. Each belt has a functional buckle and features a Gucci script logo in gold metallic film on its outer side. Those who choose a Gucci Diana can also purchase additional leather belts in the three special colours so that they can customise their bags. There is also the option to emboss the leather belts (on the insides) in store with letters and star symbols in a variety of metallic film colours.

To add a luxurious dimension, there are versions of the Gucci Diana in precious. A patchwork of multicoloured python creates a graphic model. There are also python styles in black, rock (ecru) and bright emerald green. In crocodile there is a black and a cuir version of the Gucci Diana; and in ostrich it comes in yellow, white, red and bright emerald green.

The Gucci Diana bag will be available in select stores, for more details visit:  https://modabahrain.com/shop/gucci/.