MODA Mall Celebrates the Kingdom’s Golden Jubilee with a Unique Prize, in Partnership with Adamas Motors 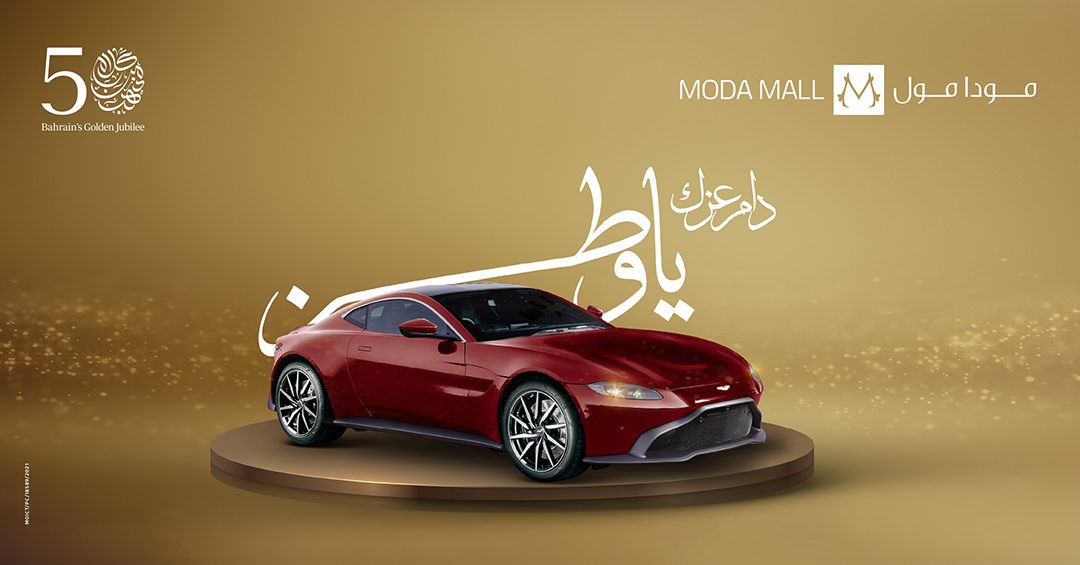 Celebrate Bahrain’s 50th National Day at MODA Mall and drive away in an Aston Martin Vantage.

Manama, Bahrain – 14 December 2021: In the spirit of the festive season and to commemorate the Kingdom of Bahrain’s Golden Jubilee – marking the 50th National Day – MODA Mall, Bahrain’s high-end shopping destination, is giving away a prestigious Aston Martin Vantage as part of its Shop and Win campaign starting from 5th December 2021 – 31st January 2022. MODA Mall has partnered with Adamas Motors, the official dealer for Aston Martin in the Kingdom.

Mr. Chris Gibson, Deputy General Manager of Bahrain World Trade Center and MODA Mall, commented: “This year is a unique year marking the 50th anniversary of the Kingdom of Bahrain’s independence, as such, required a special prize to reward our shoppers for their continuous support. For this campaign, we have once again tied up with Adamas Motors to give away an Aston Martin Vantage, an iconic British Marque, a truly remarkable piece of engineering that has featured in several James Bond movies. MODA Mall has been a part of the Kingdom’s history for over three decades, and on this occasion, we would like to extend our thanks to His Majesty King Hamad bin Isa Al Khalifa, the King of the Kingdom of Bahrain and His Royal Highness Prince Salman bin Hamad Al Khalifa, the Crown Prince & Prime Minister for fostering an economic environment where international and local brands can thrive.”

Mr. Karl Hamer, CEO Adamas Motors, commented: “We are excited to be partnering with MODA Mall this National Day for this special year of the Golden Jubilee celebration, and shop and win competition. This is the first time that MODA Mall’s discerning shoppers can win an iconic Aston Martin, which is synonymous with luxury and speed. As a long-term investor in the Bahraini economy, on the occasion of the Golden Jubilee, we wish the Kingdom of Bahrain continued progress and prosperity under the wise leadership of His Majesty King Hamad bin Isa Al Khalifa, the King of the Kingdom of Bahrain and His Royal Highness Prince Salman bin Hamad Al Khalifa, the Crown Prince & Prime Minister.”

For every BD30 spent at MODA Mall’s refined retail outlets, shoppers are given one entry into the Golden Jubilee draw. Customers will need to scan the QR code available at MODA Mall or click the link on website to register, enter their details and upload their receipts. The Grand Prize draw for the Aston Martin will take place on 3rd February 2022 and will be overseen by the Ministry of Industry and Commerce and Tourism (MOICT).

MODA Mall, located at the Bahrain World Trade Center and is the epicenter for luxury, fashion, and fine dining and is the ideal location for shoppers to enjoy their shopping experience. The mall is open daily from 10 am to 10 pm. Stay in touch with MODA Mall on www.modabahrain.com, or follow @modamall on Facebook and @moda_mall on Instagram and Twitter.